In the 19th century, the foundation of existing learning methods and systems was born. The learning environment developed at his time continued the same for nearly 150 years. Certain subjects were strongly connected to certain learning environments. An example is classroom subjects such as languages were the environment was always the same with a row of pupils and a teacher's table at the front of the room. The wall had one or two blackboards and a clock. An exception to this was sports class, which took place either in the gym or at the schoolyard.

In the 1980s, we began to use more informal learning environment for art, music and visual arts. For these subjects the pupils then began to sit in different groups within the classroom. In general though, the basics remained the same; the teacher was still at the front of the class, the walls had blackboards and a clock. 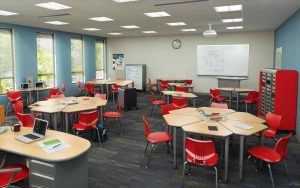 In the 21st century, the role of the teacher began to change. This also led to changes in learning environments. The need for a teacher's table to be located at the front of the classroom was removed. The teacher was no longer the authority standing in front of the class, they had been moved to the middle of the classrooms. Where the interaction between teacher and individual student is greater. The seating arrangement was no longer facing towards one point; instead, there were different groups of students, which allowed students to work in the team.

In modern times, learning environments are multifaceted. There are beanbag classes, semi-circular classroom, and the traditional classroom still has its place. Different environments allow for different studies, which the teacher must take into account when planning to maximize the benefit. The facilities are still physical; the walls surround the rooms, one or two walls have a screen, a whiteboard or a blackboard, where the students can follow and of course the clock.

The digital learning environment is still in its infancy. There are many digital teaching platforms that have strengths and usage opportunities, but a good complete package is still missing. The use of these existing tools requires much time and resources and self-study so that they can be used skilfully and efficiently. However, progress is going forward at an incredible pace, so it is assumed that different digital learning environments will soon be every day. Digital environments provide one interesting opportunity; the wall clock no longer means anything.

Future learning environments are not connected to time or place. The student can choose when to take part in the course and in what kind of environment. You do not necessarily have to be in the same country as the course administrator or the school institution. Many forward thinking teachers are excited about this change, but, at this point it seems that surprisingly the students themselves may be the limiting factor. Are we all ready for change, that is the question? Time will tell.